How We Got Our Start

You know how James Michener novels always seem to begin with "First, the earth cooled"? We're not going to go back that far, but there's a good story to tell about modern decorative ceiling tiles, and how the Ceilume brand came into being. 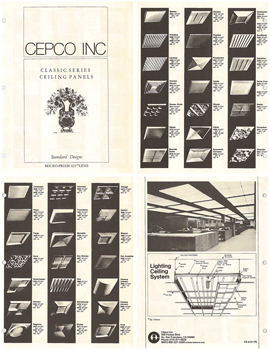 Though we aren't going to start with the last ice age, Ceilume's roots do go back a long way - to the 1940's and a little company called Cepco Manufacturing, located in the heart of San Francisco's Chinatown. Herb Wong, Cepco's co-founder, was one of the first to hold a patent on "Modular Ceilings", which is what we now think of as drop/suspended ceilings. While others were using gypsum board and mineral fiber for their panels and tiles, Herb saw the tremendous potential offered by thermoformed plastic.

Across the bay in Oakland in the 1950's and 60's, United Lighting and Ceiling Company began to take advantage of thermoplastic's unique physical characteristics to introduce innovative lighting products, and to expand listings and approvals that allowed use of their ceiling tiles as "drop-out panels" beneath fire suppression sprinklers. Fire sprinklers were not widely used in those days because they were new, they were expensive, and they were really ugly (the ugly part has changed, but not much). The ability to install United Lighting's panels below sprinklers, concealing them from view but allowing them to function in the event of a fire, helped many reluctant customers move into the sprinkler age. When Cepco closed, United Lighting purchased their patterns. When the folks at United Lighting decided to go fishing thirty years later (seriously... that's what they decided to do), Ceilume stepped in. We still offer many of Cepco and United's designs, but we've also taken the safety testing and approvals that they began to a whole new level, adding IAPMO recognition to their existing FM Global and UL listings. 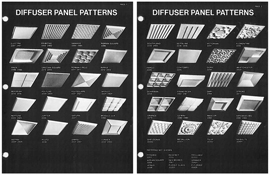 It was in the 1970's that The Old Jefferson Tile Company, operating out of the Twin Oaks Plantation in Jefferson, Texas (currently listed among the most haunted locations in Jefferson!), began manufacturing "faux tin ceilings". Though they may not have coined the term, they were among the first to offer these elegant tiles for sale. Thicker than the products offered by Cepco or United, they had the feel of authentic tin and were suitable for either glue-up or grid installation. Jefferson was a historic steamboat port from the 1800's, so the company took inspiration for their designs from the ceilings found in century-old structures around their community. 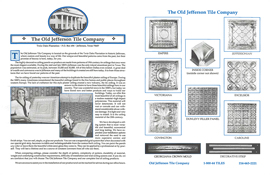 Down in Blanchard, Louisiana in the 1980's, Tom and Daisy Snelling setup shop as Snellings Thermovac. Starting with a few designs that came to them from The Old Jefferson Tile Company after it closed, and adding many of their own creations, they introduced their Ceilings Magnifique line of decorative ceiling tiles. Over the decades that followed they assembled a comprehensive family of products that was favored by interior designers, architects, restoration specialists, and builders alike. When Tom and Daisy retired in 2007, Ceilume purchased the product line. We are proud to include many of those beautiful styles, and those from The Old Jefferson Tile Company, among our offerings today.

What about Ceilume itself, you ask? Our company began as Empire West Inc. in 1968, manufacturing custom thermoformed products for the photofinishing, electronics, optics, agriculture, and automotive industries. Always an innovator, we were among the first in our industry to embrace CNC technology on our production lines, J.I.T. fulfillment, and what came to be known as Lean Manufacturing (we just called it common sense). But job shop work is fickle, and over the decades, as custom customers came and went, we always had our eye out for a product we could develop and nurture on our own. Thermoformed ceiling tiles became that product. By melding our focus on customer service and technological innovation with the rich heritage these innovative products brought with them, we have built the Ceilume brand into an industry leader.

Proud of our past, Ceilume has granted the Association for Preservation Technology International permission to include these historic catalogs in its Building Technology Heritage Library as a resource for research and building restoration.

Guiding Principle #6: Be unique. Stand out even in the most crowded marketplace.