Got a space with acoustic issues? Ceiling tiles and panels can make a difference, but we've got some bad news for you - by themselves they aren't going to solve the problem, they'll just help. And there is no Easter Bunny.. sorry about that.

What to look for (now that you aren't searching for that bunny):

Buying a new ceiling tile strictly for its ability to control sound is a little like buying a new car strictly for its CD player. Some people might actually make the choice based on that single feature, but cars were no more invented as transport devices for surround sound systems than ceiling tiles were invented for their acoustics. Can ceiling tiles enhance the acoustical characteristics of a room? Absolutely, just like a Blaupunkt can make a sweet ride even sweeter. But when shopping for a car or a ceiling tile, it is probably best to evaluate the whole package and what you want from it not just how good it "sounds".

Before we get into the specific acoustic values of ceiling tiles and how they are measured and represented, here are a few things to consider:

Should you consider the acoustical properties of ceiling tiles before making a selection? Certainly. But it is also important to make sure that your expectations are aligned with reality. Given all the factors that contribute to the total sound signature of a room, will you be able to actually hear the difference between a tile that absorbs 50% of the sound that hits it versus one that absorbs 25%? For most people in most situations, probably not.

Think of it this way: Most drivers going 60 MPH down the freeway probably aren't even conscious of the difference between a $300 car stereo and one costing $3,000. Instead, they are appreciating the entire driving experience: the look, the feel, the handling, the convenience, the maintenance, the cost, the miles per gallon of the vehicle - the whole package. Approach your selection of ceiling tiles in a similar fashion and you can't go wrong.

There are three major ratings that relate to ceiling tile acoustics: Noise Reduction Coefficient, Sound Trasmittance Class, and Ceiling Attenuation Class. Only some tiles are rated in all three categories, and the value of each rating is only meaningful in the context of the actual installation where the tile will be used. Before describing each rating, it is important to note that these values are achieved in a laboratory, and the measurements are not considered field data. Said another way: "Your results may vary," depending on where and how the tiles are used and what you expect of them.

Noise Reduction Coefficient (NRC) is a general rating that tells you how much sound a surface (in this case a ceiling tile) will absorb. This rating is represented as either a percentage or a decimal, with 1 (or 100%) being perfect absorption and 0 (or 0%) being perfect reflection. In other words, the higher the decimal or percent, the more sound the tile will absorb. While this does give a very good idea of how a tile will perform acoustically, it does not tell you what happens to the sound the ceiling tile does not absorb.

Sound Transmission Class (STC) is used to rate several different types of building materials for their ability to block sound and prevent it from passing through them. This is commonly used on walls and partitions, as it is very helpful in deciding which types of partitions will properly isolate different areas of a building. STC ratings are represented as a number, usually between 1 and 100, although not limited to that range. The higher the number, the better the material is at blocking sound. A rating of 10 is considered terrible, allowing talking voices to be heard through the rated system, while a rating of 60 or more makes for an excellent sound blocker.

The STC rating is helpful, but does not tell you what will happen to sound once it is blocked. For example, a thick concrete wall might have an excellent STC rating, but it will send all sound bouncing right back into a room. This will keep the sound from passing through the wall, but will make for a very echo filled room.

Ceiling Attenuation Class (CAC) is really a completely separate rating system. While it does deal with sound absorption and attenuation, it is a bit more specific.

In an installation where a drop ceiling has been installed and walls have been installed that only reach up to the drop ceiling level, sound can pass up into the ceiling plenum, over the wall, and then back down into another room. The rate at which ceiling tiles inhibit this passage of sound is called the CAC. This rating is commonly misunderstood as a rating that describes how much sound reflects off of the face of a tile. This is a misconception, and the CAC rating should not be given as a rating to describe any situation other than the aforementioned.

NRC, STC, CAC and YOU

There is no hard and fast rule about combining these acoustical values, but it is good to be aware of them while shopping. Unless you have a very specific need, they shouldn't be the sole deciding factor in your purchase.

So, how important are these ratings? If you are evaluating tiles in isolation, comparing one type to another based only on their acoustic performance, these numbers are all you've got to go on. Fortunately that isn't the case. You are also going to be considering appearance, ease of installation, price, selection, indoor air quality, availability, and a host of other things. Add these acoustical ratings to that mix, think about which overall qualities are most important in your specific installation, and in no time at all you'll know exactly which tile sounds right for you.

When shopping specifically for acoustical panels, most people want to reduce echo or "noise" within a room, so they are most interested in NRC. And no wonder, a standard sheetrock ceiling reflects back 95% of the sound that hits it! The term "balance" is often used relative to sound, so Ceilume offers three choices that allow you to balance acoustic performance with aesthetics and price to create the ceiling that suits you best. 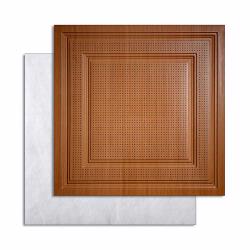 Best price-to-performance ratio that is unmatched by any other decorative acoustical ceiling.

A high end acoustic ceiling panel system that absorbs 85% of the sound that hits it (over 90% in the common vocal range).

Better sound absorption and designer style at a lower price per square foot for those on a budget.

A cost effective acoustic tile system that absorbs 50% of the sound that hits it (over 70% in the common vocal range). 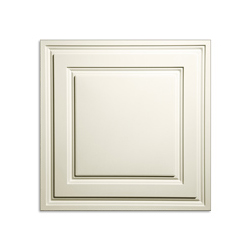 Good sound performance. Better than your drywall ceiling at an unbeatable price.

Ceiling tiles that absorb a respectable 25% of the sound that hits them (38% in the common vocal range).